A Division of Turf Unlimited

We Keep It Green

Bug Extermination is Not Yet Over; Everything You Need to Know About Box Elder and Stink Bugs

With fall comes colder temperatures and shorter days. Fall symbolizes the start of new beginnings, apple cider, and Patriots football. It is also the start of the “stinky home invader.” Several species of bugs and other annoying pests begin making their way into your homes during this time, seeking the promise of warm shelter. Two of the most common types of these inconvenient terrors also release an unpleasant smell, the box elder bug, and stink bug. Both feed on outdoor plants in the summer and seek out the warmth of your home in the fall. Both permeate a distinct odor when crushed or destroyed. Here is everything you need to know about fall pest control.

Spotting black and red creepers around your windows, walls, and other areas? No, it’s not because it’s Halloween, you are probably seeing box elder bugs. They are easily identified with elongated black bodies and red markings. About ½ inch in length, they have a thin red inverted V in the middle of the back.

Box elder bugs get their name from their primary source of food, the box elder tree. They can also be found on ash trees, maple trees, cherry trees, and a variety of other seed-bearing trees. You can often see large numbers of them hanging out on tree trunks and branches during the summer. While they do not cause any harm to the trees, they suck out the sap from the leaves, shoots, and seeds for food. Your chances of having a box elder bug infestation in the fall/winter increase if you have any of their food sources on your property.

Box elder bugs will seek out a warm shelter starting in the fall and find areas in your home, such as attics, walls, or beneath vinyl siding. When the sun is out, they like to come out of hiding and gather in clusters. They are not harmful to humans and do not cause destructive damage to your home. However, their feces can stain light-colored surfaces, and killing them can release an unpleasant odor. This is why many homeowners consider them a nuisance. 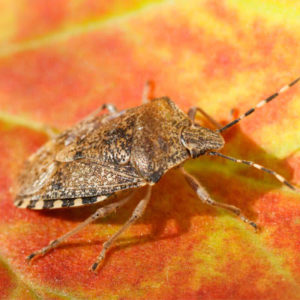 Yes, you guessed it. Stink bugs are called such because they leave off a smelly odor when threatened or crushed. They are usually discovered inside the home in large quantities, both dead or alive in the fall. This is because, like the box elder bugs, they are not able to tolerate cold weather. Also, like the box elder bug, during October, crowds of stink bugs make their way inside via windows, doors, chimneys, and other cracks and crevices.

Stink bugs have brown and tan bodies and have patches of copper or blue-metallic on their heads. Adult stink bugs can grow as long as 2 cm in length and are approximately the same in width. They are usually oval but can be shield-shaped as well.

Stink bugs typically feed on fruits in orchards, destroying the crops of berries, tomatoes, peaches, peppers, and corn. Inside the home, they will feast on the fruits and vegetables in your kitchen directly from a fruit basket or fruits and veggies sitting out. They begin to seek out shelter in the fall, finding warmth and comfort inside homes and commercial buildings in the walls, attics, and crawl spaces. They resurface in early spring. If the weather warms up prematurely, stink bugs may be misled into thinking spring has arrived, and they become active again.

Stink bugs do not bite or sting. They can pierce through the skin of fruit, stems, and the roots of plants to suck out the juice with their mouth, but they are not harmful to people. Their method of defense is to release a foul odor that smells much like the scent released by skunks.

The good news is that neither box elder bugs or stink bugs reproduce inside the home.  Because they find their way inside through windows, doors, utility entrances, and other openings or holes, there are a few ways you can help prevent them from getting in. A few fall pest control tips include:

Do not crush, destroy, or kill either bug as both will leave off a distinct yet foul odor, the stink bug having a profound worse smell than the box elder. Instead, use a vacuum cleaner to suck them up and dump the bag outside in case they escape. The bag must be discarded to prevent the odor from permeating the area.

For the Best Fall Pest Control, Call the Professionals

Your best bet for fall pest control is to turn to Pest Control Unlimited for help. Our bug extermination programs can help prevent and eliminate box elder bugs, stink bugs, and other unwanted pests. We offer both residential and commercial pest management programs.  Call us at 888-649-9919 to learn how or fill out a request online now.